Dr. Kalyani Bondre
I am a professional Indian Classical Singer. I hold a Ph.D. in Economics and Master's Degrees in both, Economics and Business Management; and I also work as Faculty in Economics for Management students. I have a passion for writing and this blog is a platform for me to share my experiences and express my thoughts and ideas, views and opinions, gathered while working in diverse fields.

Concert at the Tagore Centre of the Indian Embassy in Berlin

It was a great honour to be able to give a one and a half hours' solo performance at the Tagore Centre of the Embassy of India, Berlin, Germany. This was on August 13th, last year which was just two days before India's 66th Independence Day! I had performed in Germany before, but this one was really special!

Music no doubt transcends cultures, languages and countries, but I believe that the audience must understand the music to be able to appreciate it even more. And that has always been my endeavour: to connect with my audiences as much as I can. This time, I decided to go in for shorter duration Madhyalaya and Drut compositions, which would depict my country's diverse culture. Also, being a Maharashtrian, I wanted to showcase my state's rich musical heritage, Abhangas, or saint poetry and Marathi Natyasangeet; the former which played a very important role in weaving the social, cultural and spiritual fabric of Maharashtra, and the latter, the quintessential stage music of Maharashtra, which is often credited with tuning the Marathi ear to Hindustani classical music. I selected a few appealing classical bandishes in popular ragas like Hansadhwani, Yaman, Nand, some traditional, and some of my father's guru Ustad Mohammad Hussain Khansaheb's unique pieces.

On the day of the concert, grey clouds covered the green city of Berlin and it felt as if the Indian monsoon was about to make its presence felt! As we reached the Indian Embassy, I proudly looked up to the Indian tricolour at the entrance of the Tagore Centre. The sound arrangements in the auditorium were top class, and after a quick rehearsal and a sound check, we were ready to roll!

Just as the clock was ticking, and the time of the concert approaching,  and as we were enjoying a piping hot cup of tea, there was a thunderstorm and it was actually the Indian monsoon making its presence felt in the German capital! It rained as it does in the tropics, and although the much talked about climate change might be to blame for this unexpected and unusual thundershower, for me it was as if I was sipping chai in my own city, the only missing thing probably being the garam garam pakode!

While I was enjoying this wonderful weather, the staff at the Embassy got a bit concerned about how many people would turn out braving this peculiar weather. As I looked at it, although the audience turnout was indeed very important for me as an artiste, it was an uncontrollable factor. Besides, it is more important how much the audience enjoys your performance, rather than how big it is. As an artiste, there was one definite change I had to now make in the line-up of compositions that I had decided to sing. Raga Malhar which is synonymous with the Monsoon, thundershowers and the beautiful feeling of raindrops covering the entire surroundings, had now to be included! I decided to sing Sawan Ghan Garaje, the famous composition in Raga Miya Ki Malhar. 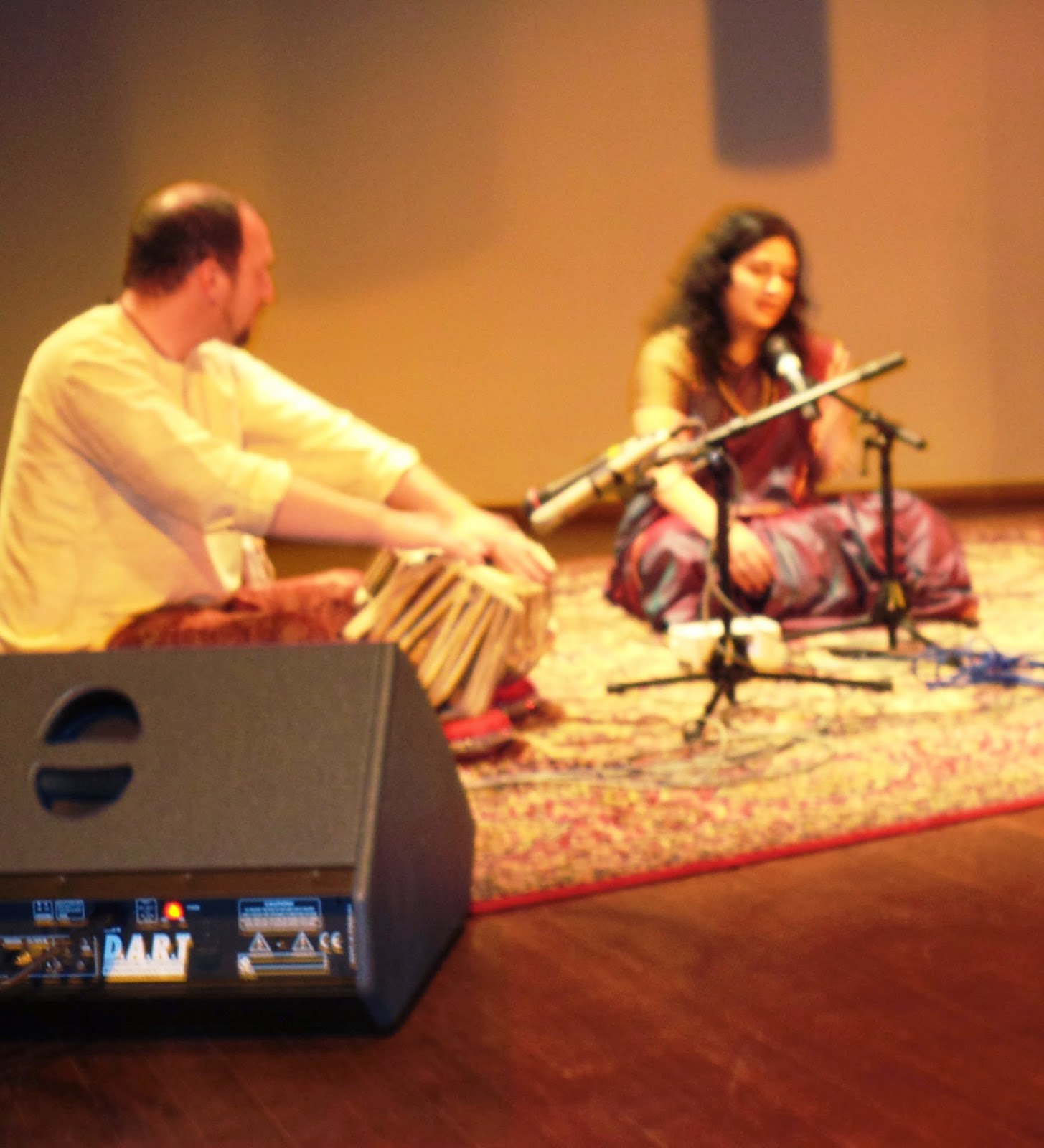 As the curtain opened, I was pleasantly surprised to see a near full auditorium, which meant that the unexpected thundershowers did not deter the audience from coming for this concert. The Deputy Chief of Mission and other dignitaries of the Ministry of External Affairs, Government of India were present. Moreover, generally when Indian artistes perform abroad, a huge portion of the audience is Indian. But here, except 6-7 Indian faces, the entire audience was European. I am always touched and humbled by the amount of appreciation, curiosity and respect that the foreign audience shows for Indian classical music.

Indian classical music is a vast canvas on which the musician sketches the images of his imagination and connects with his audience in his own unique way! And I feel I am blessed to be doing service to this huge art in my own small way.

Click on the link below to read my article in Marathi published in the daily Sakal:
http://epaper3.esakal.com/24Jun2014/Enlarge/PuneCity/Pune1Today/page9.htm